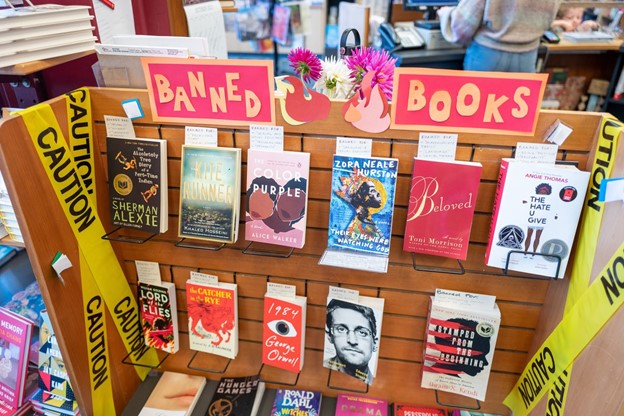 We have all heard news snippets related to banning and or burning books.  We ask ourselves, is this really happening in 2022?  The answer is most definitely yes.  While I cannot begin to wrap my heart around this, there are plenty of people who believe that by banning books they are doing the best thing for their children and for their country.  I, on the other hand, am seeing things a bit differently.  To remove, ban and burn these books you are essentially whitewashing our history, censoring our voices, dismissing our identities and reducing us to a place of ignorance.

The folks who are banning and burning are choosing to deliberately sideline many notable periods in history by not acknowledging the many struggles, uprisings and controversy that has shaped this and other countries.  Teaching about the holocaust, sexuality or the civil rights movement is too divisive, too provocative, and too controversial in their opinion.  The problem is that by doing this we are not protecting our children, but rather hurting them as they grow into adults ignorant of what really was.  Note, that many of the “banned books” are not historically rooted but remain on the list.  From Scout and Atticus (To Kill a Mockingbird) to Margret (Are you there, God, it’s me Margaret) books are being targeted as controversial, immoral, and profane.  These are books I grew up reading.  I can still feel the impact that they had on me.  I remember the discussions that occurred and the understanding that came from those conversations.  It is not just the book that is being banned, but our own ideas, opinions, and consciousness.

The following are excerpts from three articles I found.  I have included the links to each article . . .

Congressional Democrats Target Bans on Teaching About Racism in Schools

-from US News and World Report

A new bill aimed at protecting the teaching of African American history cites a moral imperative to ‘finally reconcile with this nation’s history of racism and white nationalism.’

“It is our moral imperative to tell the truth about our past to finally reconcile with this nation’s history of racism and white nationalism,” Rep. Jamaal Bowman, a New York Democrat and former teacher and principal, said in a statement announcing legislation aimed at protecting and promoting the teaching of African American history in K-12 schools.

“The moment we are in requires of us a clear-eyed vision to ensure that not just our children but people of all ages, have access to resources and education that accurately recount African American history,” he said. “As a Black man and an educator, I cannot make clear enough how important it is to the success of our democracy for us to come to a collective understanding and agreement that we must take our commitment to learn from our past seriously.”

Read the Books That Schools Want to Ban

Book banning is back. Texas State Representative Matt Krause recently put more than 800 books on a watch list, many of them dealing with race and LGBTQ issues. Then an Oklahoma state senator filed a bill to ban books that address “sexual perversion,” among other things, from school libraries. The school board of McMinn County, Tennessee, just banned Maus, Art Spiegelman’s Pulitzer Prize–winning graphic memoir about the Holocaust.

Hiding these images from children purposefully ignores the mechanized gruesomeness of the Holocaust. And Maus’s removal isn’t a side effect of an otherwise neutral attempt to keep classrooms wholesome. As I wrote in December, getting rid of books that spotlight bigotry is the goal.

Books have been the targets of bans in America for more than a century. Maus is not the first, or the last, casualty of an ideology that, in the name of protecting children, leaves them ignorant of the world as it often is.

-from The New York Times

Parents, activists, school board officials and lawmakers around the country are challenging books at a pace not seen in decades. The American Library Association said in a preliminary report that it received an “unprecedented” 330 reports of book challenges, each of which can include multiple books last fall.

“It’s a pretty startling phenomenon here in the United States to see book bans back in style, to see efforts to press criminal charges against school librarians,” said Suzanne Nossel, the chief executive of the free-speech organization PEN America, even if efforts to press charges have so far failed.

As the Director of Equity and Inclusion, I have spent countless hours reading these and other books pertaining to our history of exclusion.  Imagine for a moment that I did not have these resources available to me.  I would be coming to you from a place of ignorance, with no context and little understanding.  How in the world can we move forward if we don’t know where we have been?   By banning and burning books we are subjecting our children to a one-sided story where ignorance is the goal.

I have attached a link to a list of banned books.  You may want to pick up a few since we do not know how long they will be available to us.